Alfa Romeo Says Yes to Hybrid Tech for Big SUV, No to Plugging In 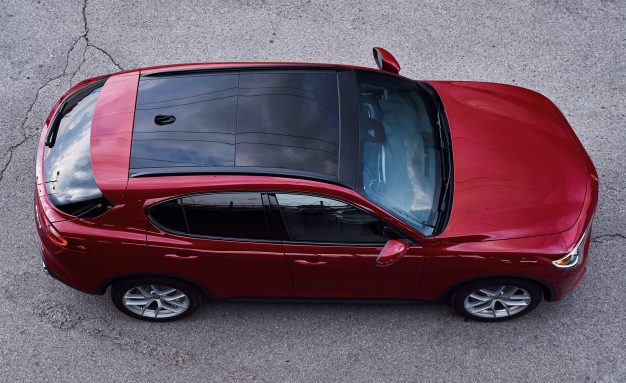 The flagship SUV that will be the largest Alfa Romeo vehicle, which won’t arrive for two to three years, might not be its thirstiest. That’s because this model reportedly will be the first from the brand to offer a hybrid setup—one that should boost performance as well.

The news comes from Alfa Romeo chief technical officer Roberto Fedeli, via Britain’s Auto Express, who said that 48-volt hybrid technology, combined with an electric turbocharger, is something that the automaker can apply to the vehicle “without losing anything.” So equipped, with the turbocharged 2.0-liter four-cylinder engine, the powertrain could make up to 400 horsepower—versus the current maximum of 280 horsepower made by the brand’s current turbo 2.0-liter four—and would help offset the expected 400-to-500-pound weight increase over the Stelvio crossover.

The SUV is expected to be closely related to the Stelvio (shown below), but with a seven-seat configuration and a longer wheelbase that would position it against the Volvo XC90, the Audi Q7, and BMW’s upcoming X7.

Alfa’s adoption of such technology wouldn’t be unique to the brand. Automakers will be turning increasingly to such solutions as they struggle to meet mileage requirements while preserving the driving attributes they want for their brands. The supplier Delphi Technologies—itself a seller of hybrid components and systems—said that it envisions such systems being used in 54 percent of new vehicles in 2025 and noted that these technologies together incrementally cost less than would a diesel engine.

But don’t think that means Alfa is planning to jump on the electric-vehicle bandwagon. Fedeli said that a “plug-in hybrid could be a problem for the Alfa DNA point of view.” Fortunately for him, Alfa Romeo is seen as part of a larger Fiat Chrysler Automobiles whole by regulators in Washington, D.C., and Sacramento. That could keep charging ports out of the picture for the Italian marque for quite some time, since other FCA brands could be relied on to offer plug-ins to satisfy regulations.