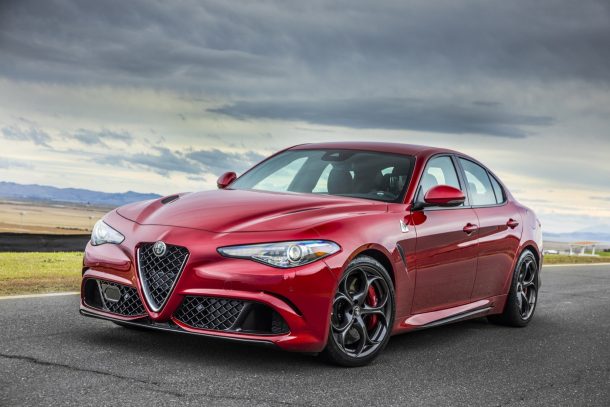 Many years of competing in demolition derbies taught me many things, such as the value of not looking over my shoulder while reversing into someone at a high rate of speed and the importance of a good neck brace. I also learned that while one can substitute other liquids for transmission fluid, braking systems don’t play well with any pollutant that’s not designed to be in there.

Alfa Romeo has also discovered this fact, and is now recalling a total of 307 Giulia sedans and Stelvio crossovers from the 2018 model year for potentially contaminated brake fluid.

As detailed by the NHTSA, certain Giulias and Stelvios may contain brake fluid that was contaminated in the assembly plant with a non-compatible oil type. On November 23, two vehicles within the plant failed the dynamic Customer Product Audit quality test when they experienced a loss of clutch pressure. FCA says the entire yard was subsequently placed on hold as a safety measure.

Five days later, Alfa Romeo opened an investigation into the loss of clutch pedal pressure due to QC failure of those two subject vehicles. The same day, the boffins at Alfa donned white coats and conducted laboratory analysis on the vehicles that failed QC. This revealed contamination of the brake and clutch fluid with mineral oil. Further investigation found that a pallet containing those three fluids was used starting November 13th.

The next day, all vehicles were held at the assembly plant, with suspect vehicles tested for oil contamination. On December 5th, the plant created a system in which vehicles would be assembled using brake and clutch fluid from barrels they knew to be uncontaminated. Using date codes and a bit of math, Alfa determined 307 Giulias and Stelvios were built during the time frame in question.

What happens when brake fluid is polluted? Well, the brake system components contaminated with non-compatible oil may become damaged and braking performance may suffer. Vehicles with contaminated brake fluid may experience decreased braking performance when depressing the brake pedal. In certain cases, it can cause a system failure with little warning, leading to a vehicle crash.

Alfa Romeo will notify owners, and dealers will inspect the braking system, replacing it as necessary, free of charge. The recall is expected to begin February 8, 2018. Owners may contact Alfa Romeo customer service at 1-844-253-2872. Chrysler’s number for this recall is T84.